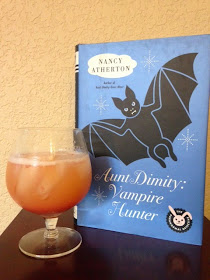 Kerry Hammond has been matching drinks with books again. Here she is with Aunt Dimity: Vampire Hunter by Nancy Atherton...

The Aunt Dimity series, written by Nancy Atherton, is one of my favorite cozy mystery series and I am in the process of collecting signed copies of each installment. Aunt Dimity: Vampire Hunter is book 13 in a series that so far contains 20 books. I will give a little bit of backstory on the series before I tell you how great the book was, but I do recommend that anyone wanting to give it a try should start with book #1, titled: Aunt Dimity’s Death.

All through Lori Shepherd’s childhood her mother told her stories of the adventures of what she assumed was a made-up character. Aunt Dimity had many adventures and Lori always listened to them with rapt attention while hugging her little pink flannel bunny, Reginald. When Lori was a young woman, and after her mother had passed away, she found out that Aunt Dimity was a real person. She had been her mother’s best friend when they were both nurses in England during WWII. The stories she had been told were actual stories about Dimity. She unfortunately found out too late, after Aunt Dimity had passed away, when she was contacted about her appearance in the will. Aunt Dimity had left her a small cottage in the English countryside, as well as all of her worldy goods. You find this all out in book 1 and I am trying not to give any spoilers, but some of it can’t be helped. Ok, so here’s the kicker. Lori frequently solves mysterious happenings both in England as well as in other places that she visits. She is never without her pink flannel bunny, or a particular blue journal. When she opens the journal and speaks aloud to Aunt Dimity, her questions are answered as Aunty Dimity writes in the journal before her eyes, from a place beyond the grave. Dimity is often able to help Lori in her investigations, and sometimes she just offers advice and a kind word. 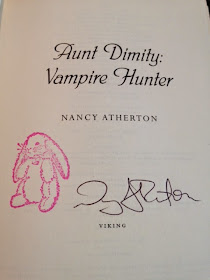 In the most recent adventure, Lori’s young twin boys claim to have spotted a vampire in the woods on one of their horseback rides. Everyone thinks the boys are making it up, or that their overactive imaginations have taken over. But Lori isn’t quite as convinced that her sons are wrong, and sets out to try and figure out just what they spotted, and whether or not there is any danger lurking in the woods. What she finds is an old woman in a farmhouse who tells stories straight out of a Bram Stoker novel.  She also visits Aldercott Hall, a beautiful Georgian mansion, seemingly hidden away in the woods, inside whose walls is a woman whose heart was clearly broken many years ago. Lori, ever the one to try and set things right, continues to not only investigate the vampire sighting, but the source of the woman’s heartbreak.

The Aunt Dimity series is nothing short of heartwarming. I love the characters, and the English village setting (although Lori and the boys often set off for faraway places). These books aren’t the type to contain violence or even murder. Most of the stories revolve around mysterious happenings and puzzles that Lori needs to solve. These solutions often bring peace and happiness to others, as well as to Lori and her family. The paranormal aspect is entirely centered around Lori’s conversations with Dimity, so if woo-woo isn’t your thing, never fear, these are light on woo-woo and heavy on charm.

If Nancy Atherton ever comes to your town for a book signing, I highly recommend attending the event. She’s very nice and always has fun stories to tell. For followers of the series, it’s great to discuss the books with her. I’ve included a couple of photos of the inside of my signed books to show that Nancy has a wonderful little extra touch when she signs a book. I stated above that the pink bunny Reginald is always mentioned, as he is Lori’s childhood companion. As you can see, Nancy carries with her a couple of bunny stamps for her signings.

The drink I’ve chosen to go with Aunt Dimity: Vampire Hunter, is The Vampire Cocktail. A sweet drink that is reminiscent of a punch, but be careful, it’s an alcoholic one.

Puree the berries in a blender or food processor. Press the puree through a fine mesh strainer to separate the pulp from the seeds. Discard the seeds. Combine the puree with the sugar in a small saucepan over medium high heat. Stir frequently and cook until mixture darkens and thickens, about 10 minutes. Chill until ready to use. Add vodka and amaretto to a shaker with ice and shake until very cold, about 20 seconds. Stir in orange juice and club soda. Pour into iced glasses. You can pour ½ of fruit syrup into each glass and stir, or if you’re entertaining, you can fill plastic syringes with equal parts of the syrup and place in glasses before serving. Then you can squeeze out of syringe and stir in front of your guests. I think you can buy the syringes at those big Halloween stores (heck they might even sell them at Walmart). 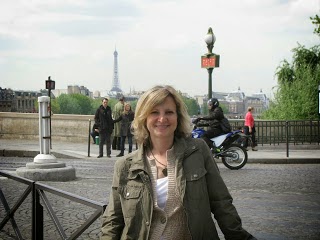 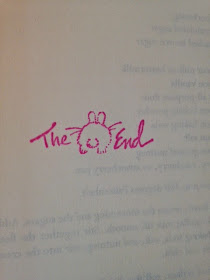