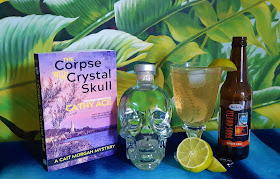 Cathy Ace joins us today to tell us about her novel, The Corpse with the Crystal Skull and match it with the perfect drink. Cathy is one of our favorite authors here at Mystery Playground and we're thrilled that's she's back with us today.

The Corpse with the Crystal Skull is the ninth Cait Morgan Mystery, and this time Cait is in Jamaica, celebrating her 50th birthday with her husband Bud. They’re staying at a luxurious private estate owned by the eccentric Freddie Burkinshaw, who is discovered shot to death in an inaccessible room at the top of a tower reputedly built by Cait’s namesake, Sir Henry Morgan.

Thus begins a tale that becomes increasingly complex, and mysterious. Cait has to grapple with her conscience as she’s forced to consider people she counts among her tiny group of friends as suspects; there’s the thrill of hunting down lost treasure; some shenanigans involving hidden passages, and a high-security task Bud’s been sent to Jamaica to undertake, aided by his secret-service colleagues. It’s complicated. Ian Fleming has a few things to answer for, and there’s more than a walk-on role for an ageing Italian movie star.

Anyone who’s read a Cait Morgan Mystery knows Cait enjoys a drink, and in Jamaica she’s spoiled for choice. She’s become mildly addicted to a grapefruit-flavoured soda called Ting, which she sometimes adds to gin – but she usually resets to her standard gin and tonic for the evenings. But something she invented during her time in Jamaica is a drink she calls the Jamaican Ginger Kicker. Inspired by the Moscow Mule, Cait took vodka, added a splash of pineapple soda for a little sweetness, then added real Jamaican ginger beer (yes, Jamaican ginger beer has a specific flavour – it’s spicy! – and, yes, it’s worth getting the real thing). The full recipe appears below – you might want to try one of these when the weather is hot, you settle down with a good book (maybe even this one, to get the entire beach-side vibe), and you need something long and refreshing. It’s got some bite, but the pineapple adds depth, and sweetness. Lime is an essential ingredient – you certainly need one to squeeze into the drink, and maybe another, for decoration. Cheers, folks!

(NOTE: Crystal Head vodka – shown in the photograph – is made in Newfoundland, Canada, and was the “brainchild” of the actor Dan Ackroyd. It’s a peaches-and-cream corn-based vodka, which this author prefers it for its pure, clean flavour. And the bottle, designed by artist John Alexander, is spectacular!)

ABOUT THE BOOK: Welsh Canadian globetrotting sleuth, and professor of criminal psychology, Cait Morgan, is supposed to be “celebrating” her fiftieth birthday in Jamaica with her ex-cop husband Bud Anderson. But when the body of the luxury estate’s owner is discovered locked inside an inaccessible tower, Cait and her fellow guests must work out who might have killed him – even if his murder seems impossible. Could the death of the man who hosted parties in the 1960s attended by Ian Fleming and Noël Coward be somehow linked to treasure the legendary Captain Henry Morgan might have buried at the estate? Or to the mission Bud and his secret service colleagues have been sent to the island to undertake? 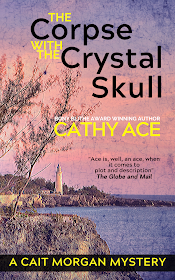